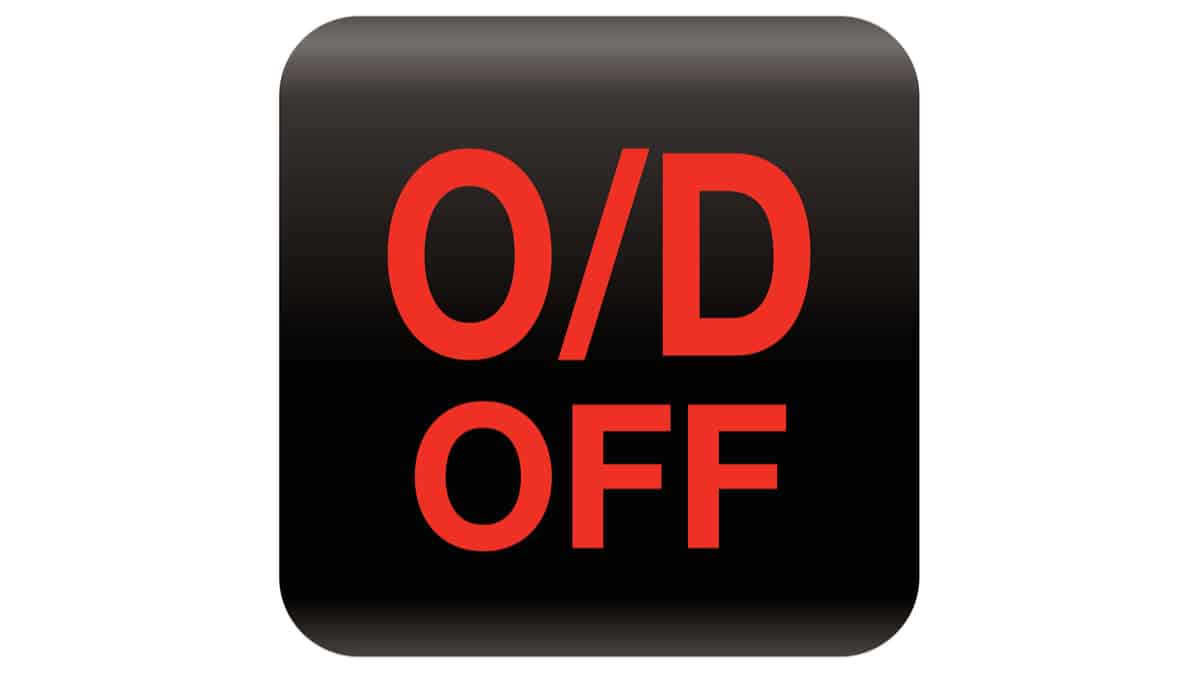 If you have seen the O/D Off symbol on your dashboard, you might be wondering about its meaning. Many modern vehicles have this feature, so you want to know how to use it. What is O/D Off on the dashboard and should you be alarmed?

In this guide, we talk about this important feature. We also show you the appropriate times to use overdrive and when to turn it off. We also help you understand if using overdrive or turning it off might be dangerous to your vehicle.

What is O/D Off On Dashboard?

O/D stands for overdrive. This feature is present in many of today’s vehicles with an automatic transmission. Overdrive is a gear that helps reduce stress on the motor by reducing the RPMs. When the O/D is off, this gear cannot be activated.

When overdrive is off, the engine can produce additional power in a lower gear. When it’s activated, the vehicle can withstand a higher speed with lower RPMs. This function creates less engine noise and increases fuel efficiency. It also leads to less wear on the vehicle.

RELATED: What is Overdrive? (& When to Use it?)

When to Use Overdrive

Overdrive is a vital part of the equation when you are driving on wide-open roads. If you are traveling on highways maintaining a consistently high speed, overdrive helps you maximize the engine’s efficiency.

Allowing your car to hit the top gear will keep the RPMs to a minimum. You will gain less engine noise on top of pushing the fuel economy to its maximum.

The overdrive function should be on in the majority of driving situations. Even though lots of people online will tell you that you need to tell the transmission what to do, this isn’t generally the case.

In fact, new cars have a lot of technology included to optimize operation. The transmission and its computer know in most cases when to shift without any input from you.

When to Turn Off Overdrive

If you have a heavy load in your vehicle or you are towing, it might be time to turn off overdrive. By allowing the transmission to hit the highest gear, you could find the vehicle struggling. This problem might be more prevalent when going up hills or steep inclines.

In fact, most car manufacturers recommend turning the overdrive off while towing. If in doubt, follow the advice given in the owner’s manual.

In most cases, the transmission should shift smoothly without a problem. However, if you notice the transmission is continually shifting between the top gear and the one below it, you might want to turn it off.

Allowing the vehicle to do this continuously is damaging to the transmission. In most cases, you will only notice it when the car is attempting to gain speed, such as when you are going up a hill. Turn overdrive back on as soon as you hit the level ground again.

When you turn the overdrive off, the transmission is forced to shift down. When the gear drops, the RPMs increase, giving you more power to increase speed.

You could overtake other cars to pass with overdrive turned on. However, having it off helps the car to be more responsive and forceful, thereby cutting down the amount of time needed.

Whether you need to come to a stop or you are heading downhill, you can use more than your brakes to slow down. The engine is capable of slowing the car down by increasing the RPMs.

Some people will argue that engine braking is bad for your vehicle, but there’s no proof that is true when used correctly. If your brakes are getting hot, it might be better for your car to rely on the engine for a little.

How to Turn Off Overdrive

The majority of today’s cars have an overdrive button located on the gear shifter. In many cases, it won’t be labeled as the overdrive button. Sometimes, there’s a sign of a vehicle traveling on a hill.

However, there are some cars that don’t have the overdrive button. In these cars, you just need to move the gear shifter to the next gear down. This creates the same effect, otherwise known as manual shifting.

Is It Okay to Leave the Automatic Car in Overdrive All The Time?

In today’s automatic vehicles, overdrive is automatically activated once your car reaches a certain speed, unless you turn it off. When you aren’t traveling at highway speeds, the car won’t go into overdrive. Therefore, it’s only going to be used when it is needed.

You want to leave the car in overdrive in normal driving circumstances. What you don’t want to do is drive your vehicle every day with overdrive turned off. While this isn’t proven to be dangerous to the engine or transmission, it doesn’t provide the driving dynamics you are looking for. With overdrive off, you will use up more fuel than what’s needed and you will notice more engine noise because of the higher RPMs. Unless you have a purpose for turning overdrive off, it’s best to leave it alone, allowing the transmission to do its job.

Motor Vehicle Service Notification – Is It A Scam Or Legit? »