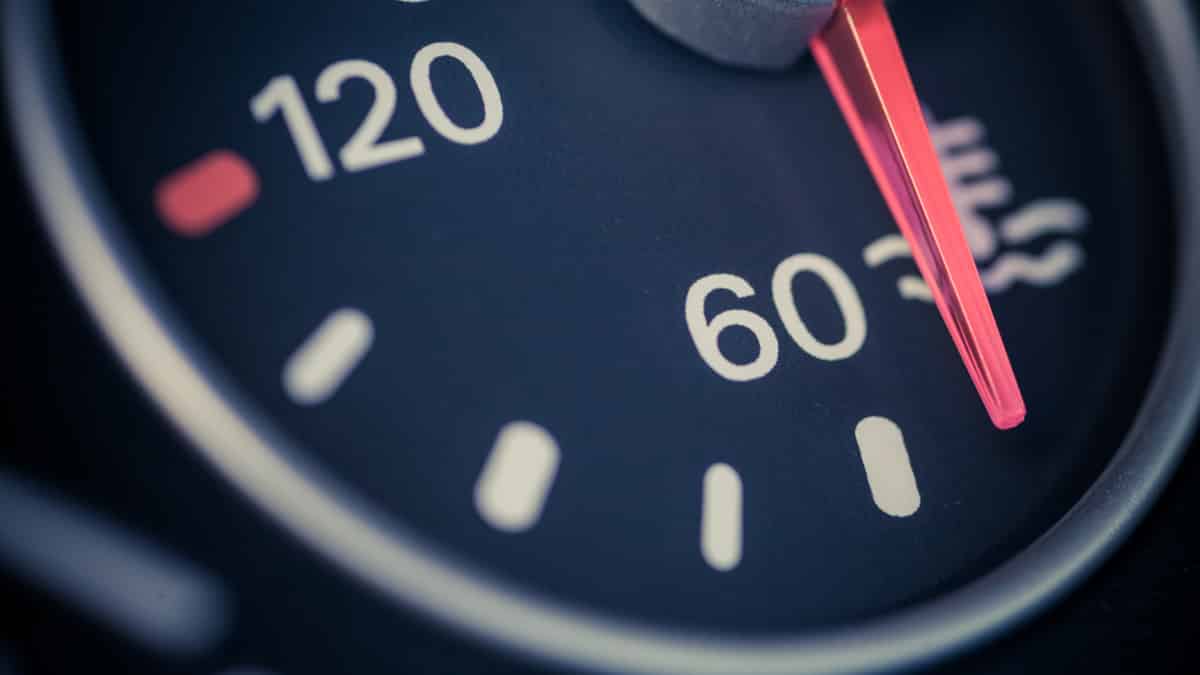 The gauge showing your car’s temperature might be the most important in the vehicle. It shows when the engine is starting to overheat and helps you prevent permanent damage. If the temperature rises, you know to pull the car over and let it cool down. But, what do you do when the car temperature gauge goes up and down?

The temperature gauge can fluctuate because of a bad thermostat or a lack of coolant. It’s also possible that there is air in the cooling system. On the other hand, it could be due to a defective coolant temp sensor or a bad temperature gauge

In this guide, we look at the problems leading to temperature gauge issues. We also show you ways to fix the problem and discuss the importance of proper diagnostics.

How Does the Car Temperature Gauge Work?

The car temperature gauge offers a look at the operating temperature of the engine. It’s normally located on the dashboard, near the speedometer. It’s designed to measure the coolant temperature, helping you see how hot or cold the motor is at any given time.

The water pump helps to circulate coolant throughout the system. When it is in the engine, it gets heated up. Then, it’s cooled down when it gets to the radiator. The thermostat is required to maintain the appropriate temperature by stopping or starting the flow of coolant. There’s also a coolant temperature sensor found near the thermostat that sends the signal needed to create the gauge reading.

You must know what the normal operating temperature is, so you can determine if the needle position is good. When the engine is cold, the gauge will sit at the bottom of the range. In most cars, this reading is 122 degrees Fahrenheit.

Once you begin driving, the engine starts to heat up. During this process, heat is transferred to the coolant to regulate the temperature. Once the engine is warmed up and everything is running normally, it will read between 180 and 220 degrees Fahrenheit.

It should remain around these temperatures until you turn the vehicle off. At this point, the coolant stops flowing and the temperature drops back down.

Reasons Car Temperature Gauge Goes Up and Down

The thermostat is used to regulate the temperature of the coolant. If it starts to fail, it can act erratically, causing the gauge to jump up and down. Once it goes bad, it will no longer act this way.

When the thermostat is stuck closed, the coolant isn’t able to flow, so the engine won’t get cooled off. Because of this, the motor overheats.

If the thermostat is stuck open, engine temperatures are going to drop below normal. You may also have trouble getting heat out of the HVAC system.

If there is too much water in the cooling system, the temperature gauge can act strangely. While some people mix water with the coolant, it’s important that too much doesn’t get into the system.

Without enough coolant, the temperatures are going to increase. Because water can’t adequately carry the heat away from the engine as coolant does, you could see unusual fluctuations in the temperature.

If the engine starts to overheat, it’s best to replace the coolant. Follow the recommended mixture of antifreeze and water based on your car’s service requirements.

If you are noticing the temperature gauge drop down at times, it could be due to air in the system. Air gets into the system through a defective radiator cap or blown head gasket. It can also infiltrate because of a leak in a radiator hose or improper procedures taken during a coolant flush.

When the air pocket holds back the coolant, the engine will start to overheat. Once it starts moving again, the engine temperature can return back to normal.

It’s always possible that the temperature gauge itself is to blame. The instrument cluster isn’t the first thing to look at, but it always is a possibility if you can’t find anything else that’s wrong.

Often, when the instrument cluster is having issues, you will see other problems. Take a look at the other gauges to see if there’s an electrical fault.

RELATED: Temperature Gauge Stays On Cold? (Causes & How to Fix It)

It’s more likely that the faulty readings are coming from a malfunctioning coolant temperature sensor (CTS). This part is found in the engine and it can become contaminated.

If the sensor gets damaged or corroded, it could send the wrong signal. It can also cause erratic readings if it is working intermittently.

If you are noticing that the temperature gauge is acting erratically, it could be due to a bad computer module. This part is needed to communicate data from the engine and other systems in the vehicle.

It’s the module’s job to relay data that moves the temperature gauge. However, if the module is going bad, you may also notice other strange issues as this part is used to control many different systems.

How to Fix Fluctuating Temperature Gauge

On average, you will spend $125 to $300 to have the car thermostat replaced. However, it’s not a difficult job to do yourself.

Start by finding the thermostat. It is probably where the top radiator hose joins the engine, but it could also be on the bottom hose. Remove the clamp and catch the coolant in a bucket underneath.

Remove the old thermostat and put a new gasket in place. You can now put on the new thermostat, replace the parts and fill the system back up with coolant.

A professional coolant flush will cost between $65 and $150, on average. However, this is another job that can be done at home.

Drain the radiator and fill it back up with distilled water. Let the vehicle run for ten minutes. Shut off the engine and drain the dirty water from the system. Put fresh coolant into the system, mixed as recommended by your automaker.

You can also bleed the cooling system if you notice air getting trapped. Take off the radiator cap and fill it with coolant as much as you can. Start the engine and turn the heat on high with the fan on low.

Continue topping off the coolant as the levels drop. Loosen up the bleed valves and rev the engine a few times to circulate the coolant. Do this until the temperature stops fluctuating.

RELATED: How to Bleed Your Cars Cooling System (9 Easy Steps)

The cost to replace the temperature gauge sensor should be between $200 and $450. You could need to change the coolant temperature sensor on the top or side of the engine, plus there’s a chance that the gauges themselves are to blame.

Make sure you perform proper diagnostics before you start replacing parts. Otherwise, you could waste money on unnecessary repairs.

This is the most expensive repair of all the options. On average, a new Engine Control Module costs about $300 to $1,500 for parts and labor.

A good code scanner should reveal if there’s an issue with the Engine Control Module. You may also notice other unusual symptoms as this central hub starts to fail.

« What is Dielectric Grease? – Applications and How to Use it